Gold Coast parents have spent 4½ hours searching for their missing daughter after their house and cabin were engulfed by fire on Tuesday.

Fire crews raced to the Tomewin Mountain Road residence in Currumbin Valley just after 4am, with seven units responding to the large fire. 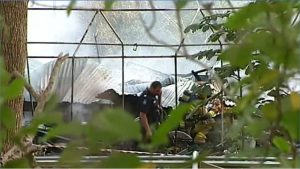 The smouldering remnants of the Currumbin Valley house and cabin.

The house and attached cabin were “well-involved” upon arrival, according to a fire service spokeswoman. By 5.45am, the flames had been extinguished.

The couple who lived at the residence were accounted for immediately but their 29-year-old daughter, who has a disability, was missing.

Police said a search ensued, until the woman was found at a nearby property just after 8.30am.

Police said the fire was being treated as accidental.